Dave is Aladdin’s Genie in Rochdale 2019 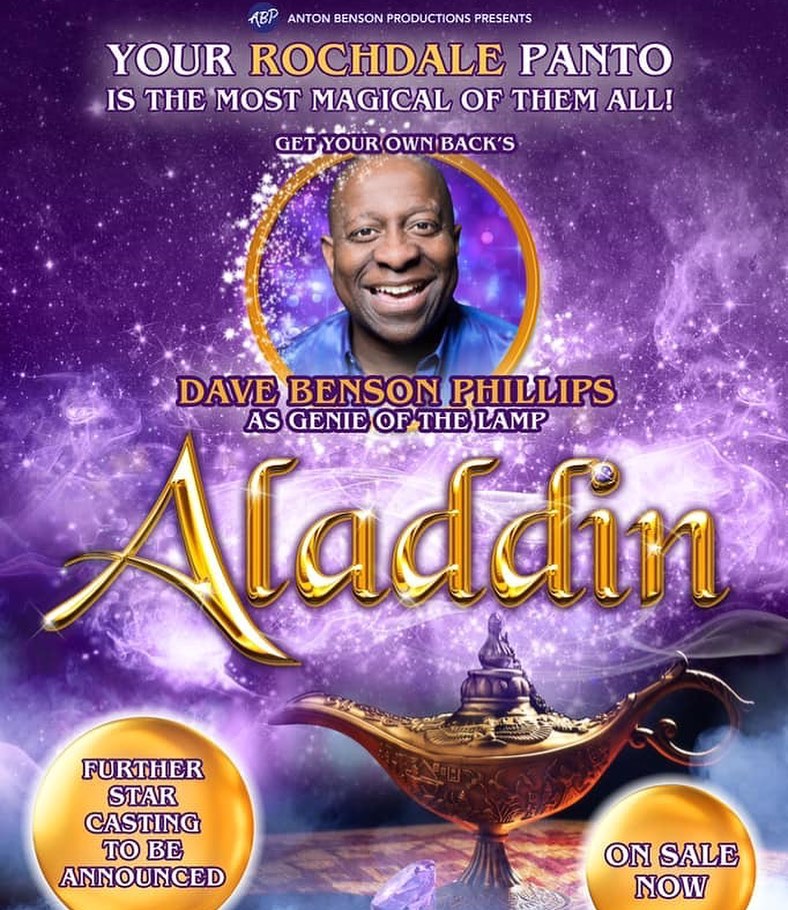 I look forward to seeing you when my 2018 panto Dick Whittington opens at 1pm on Friday 14th December and runs until New Years Eve! Tickets available here.

London’s streets of gold are calling and, with his faithful cat by his side, our hero Dick goes searching for his fortune in the big city. But he won’t make it without your help! Be there to cheer Dick on along his journey, ‘boo’ at the biggest baddie of all time – King Rat.  Packed full of fabulous tunes, stunning dancing, amazing costumes, plus lots of festive sparkle and chances to join in, this is going to be one Christmas panto not to miss. It’s gonna be a purrrfect panto! 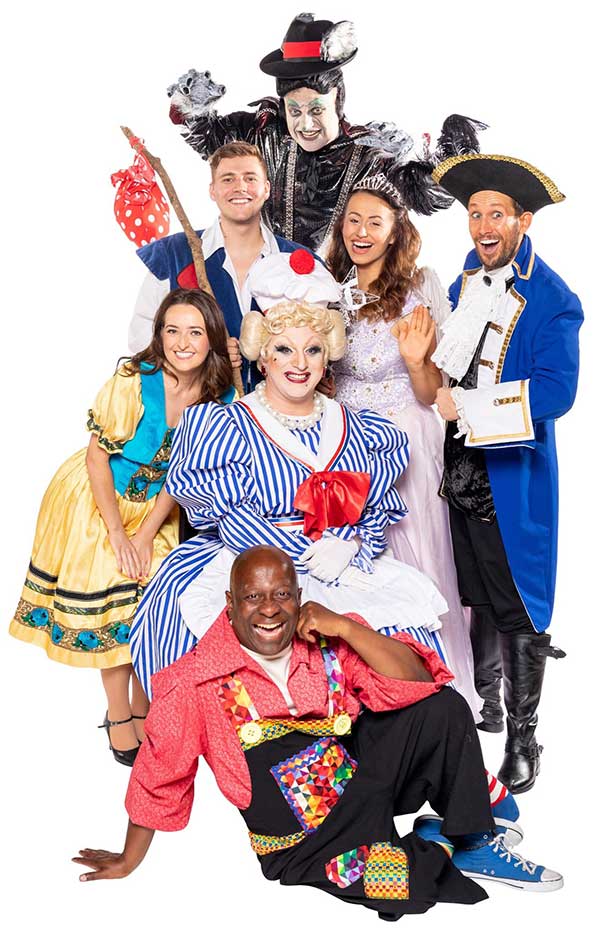 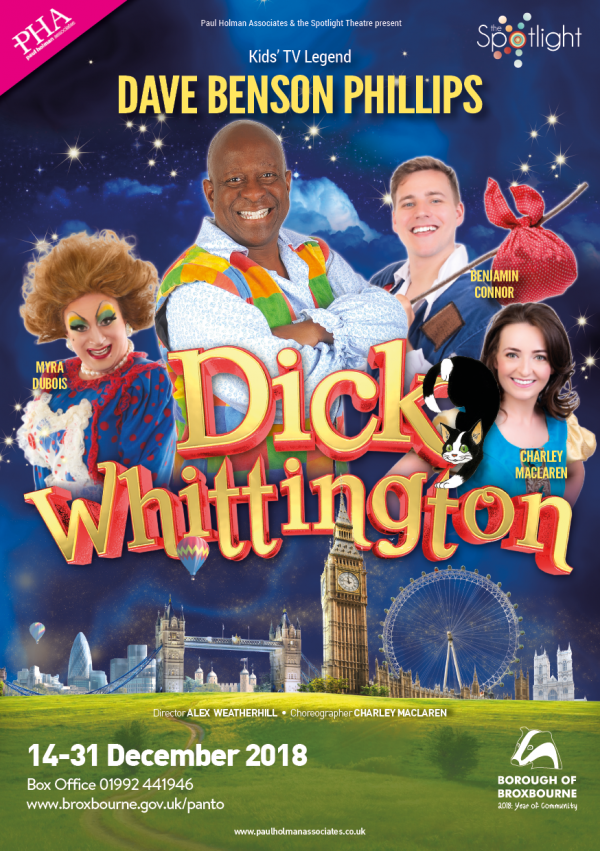 The Hertfordshire Mercury has breaking news that Dave’s 2018 Panto is Dick Whittington in Hoddesdon. He will be playing Idle Jack and the panto runs from December 14th – December 31st at The Spotlight Theatre.

Producer Paul Holman says “Dave’s years starring as principal comic in the biggest pantomimes in the country, stage presence and showmanship will ensure this panto production of Dick Whittington is a truly magical experience for all the family.” 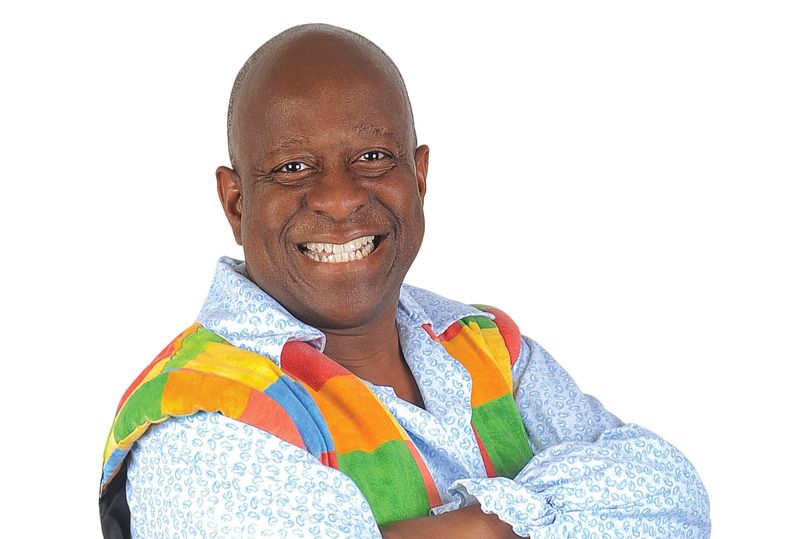 Dave had a fabulous Panto at The Palace Theatre Redditch as Muggles in Snow White. The Redditch Standard reviewed the show and said “the panto is a knockout from start to finish”.
“Cue two hours of mayhem and madness that has Benson Phillips excelling as the clown Muddles helped by his mum Dame Dolly Dumpling (Andre Vincent).”
Dave is set to return to Redditch on April 14th in the Easter Panto Alice in Wonderland. 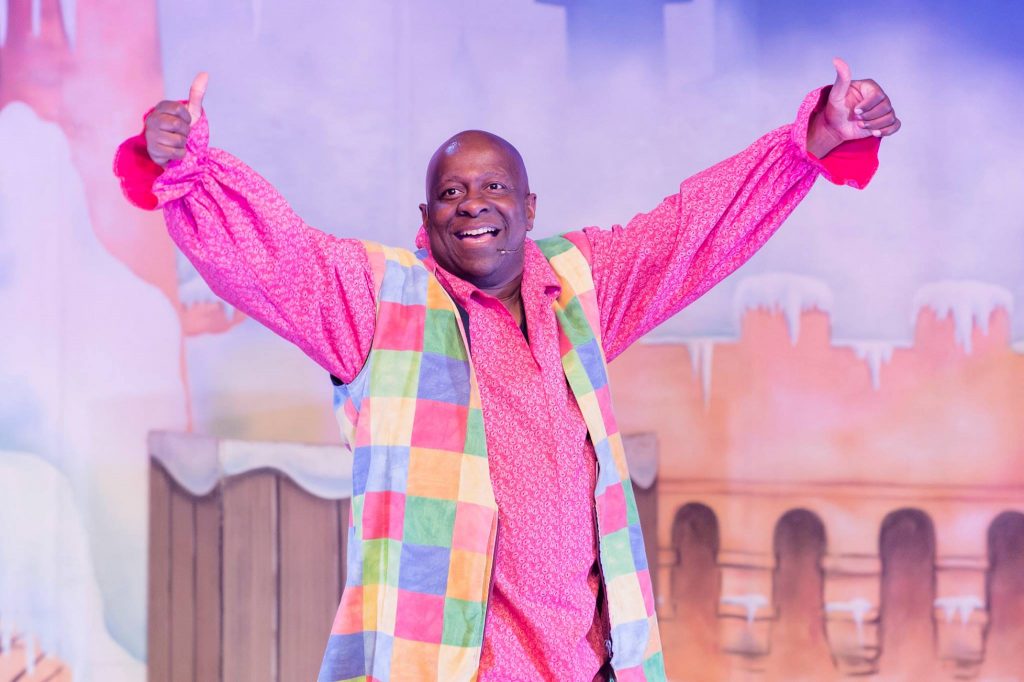 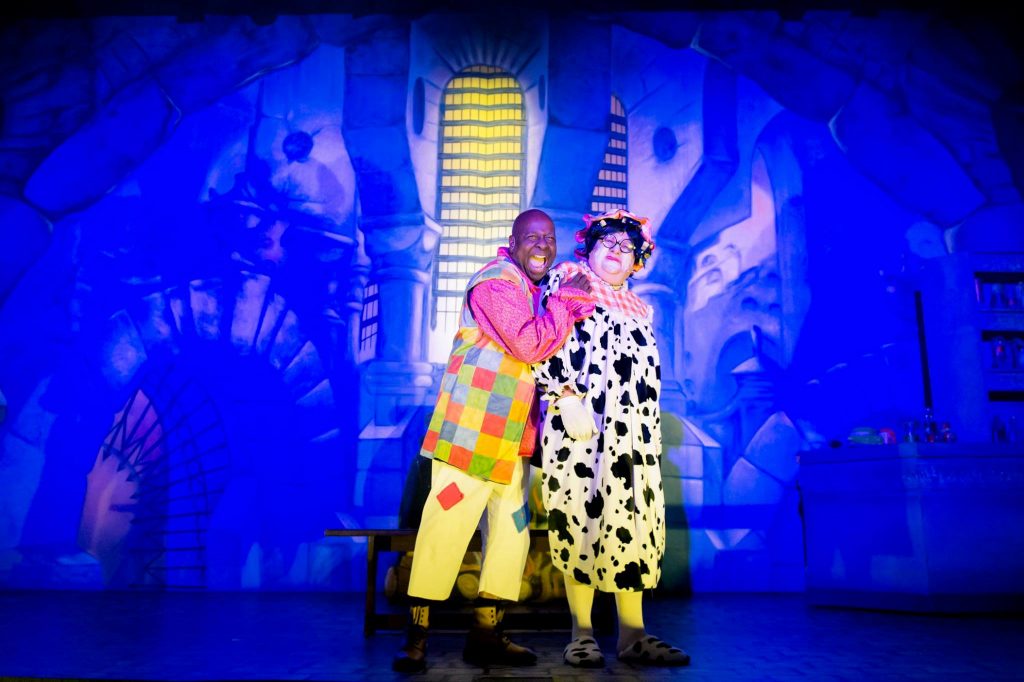 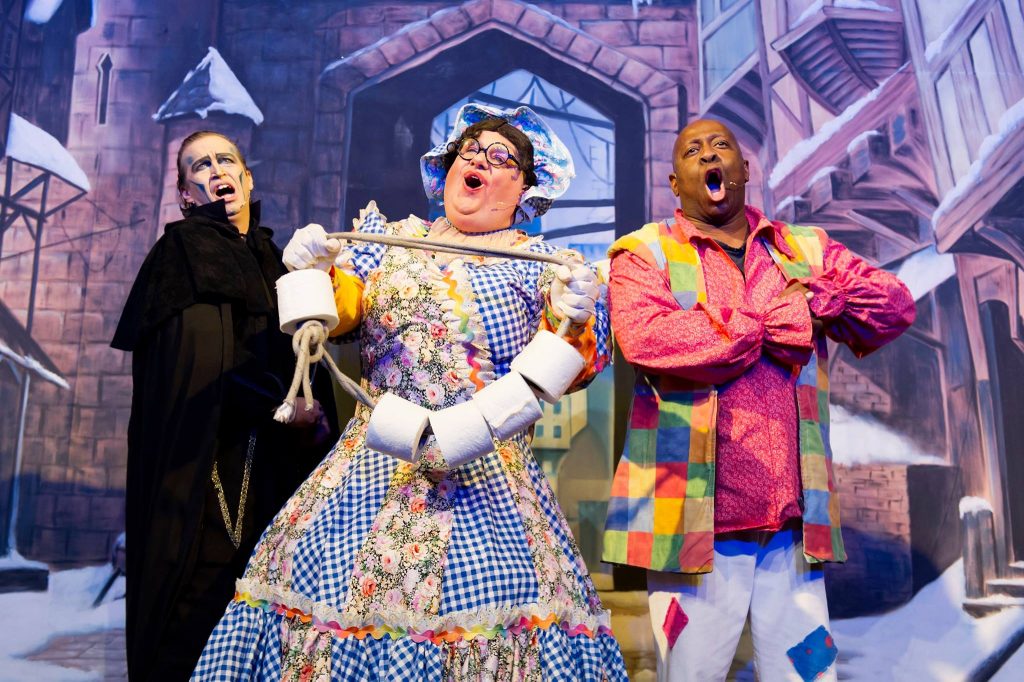 Dave in Jack and the Beanstalk – Northwich

Fie Fie Foe Fum; I smell the blood of an Englishman…

Skid Row is in peril… The towns folk are knee deep in debt, Fleshcreep is creating havoc and there’s a big ugly giant living in the clouds above the town!

When Princess Jill gets kidnapped, Jack decides he will rise to the challenge… he’s off to rescue her and win the heart of his true love!

Northwich regulars Ryan Greaves (comic) and Keeley Fitzgerald (fairy) return in this all new pantomime production of Jack and the Beanstalk with an Anton Benson Productions’ trademark laugh-out-loud script full of song and dance, hilarious one-liners and legendary slapstick routines.

We are very pleased to announce that “Coronation Street” and “Waterloo Road” actress Shannon Flynn, also known for CBBC shows “Friday Download” and “Dani’s Castle” will now be starring as Princess Jill. Dave Benson Phillips from TV’s “Get your own back” and “Playdays” has also joined our fantastic cast to take over the role of “Fleshcreep”. We trust our customers will join us in giving Shannon and Dave a warm welcome to the cast.*** 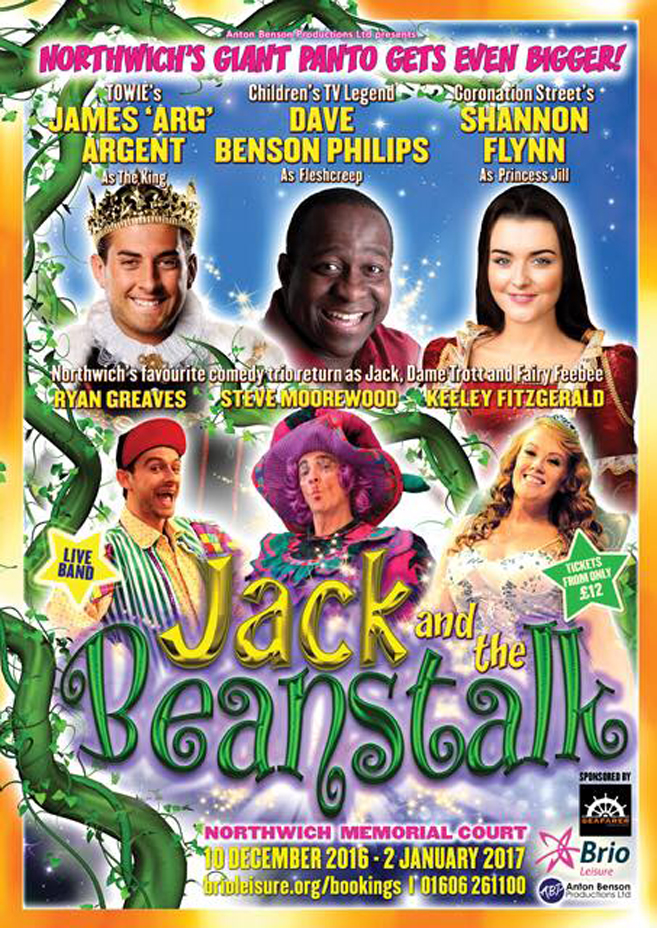 Best Ever Christmas Show & the Story of Jack Frost

*Update* Unfortunately this tour has now been cancelled*

Dave is delighted to announce his participation in this years ‘Best Ever Christmas Show’ that tours Arena’s this December. The story is aimed at pre-school children and features the theme of Jack Frost. Based around the story of Jack Frost, the sing-along, clap-along, snow-filled show features CBeebies’ Andy Day, Katy Ashworth and Cat Sandion, along with Jen Pringle from Milkshake!, plus presenters Naomi Wilkinson and Dave Benson Phillips, and of course Santa.

Tickets range from £16 and their are Family of Four ticket packages too. 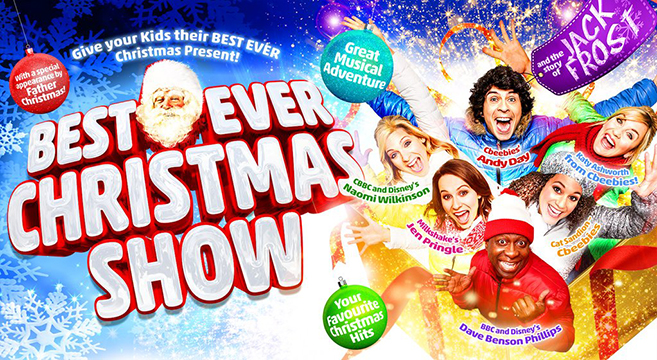 Fun interview in the December edition of The Argus’s Simply Worthing! Dave is pleased to announce that this year he will be playing the role of Scarecrow in Wizard of Oz at Epsom Playhouse.
The shows run from December 13th to January 4th 2015 with shows at 11am and 3pm most days, with 7pm evening shows on Fridays and Saturdays and 12pm and 4pm on Sundays. Do contact the Box Office for details! 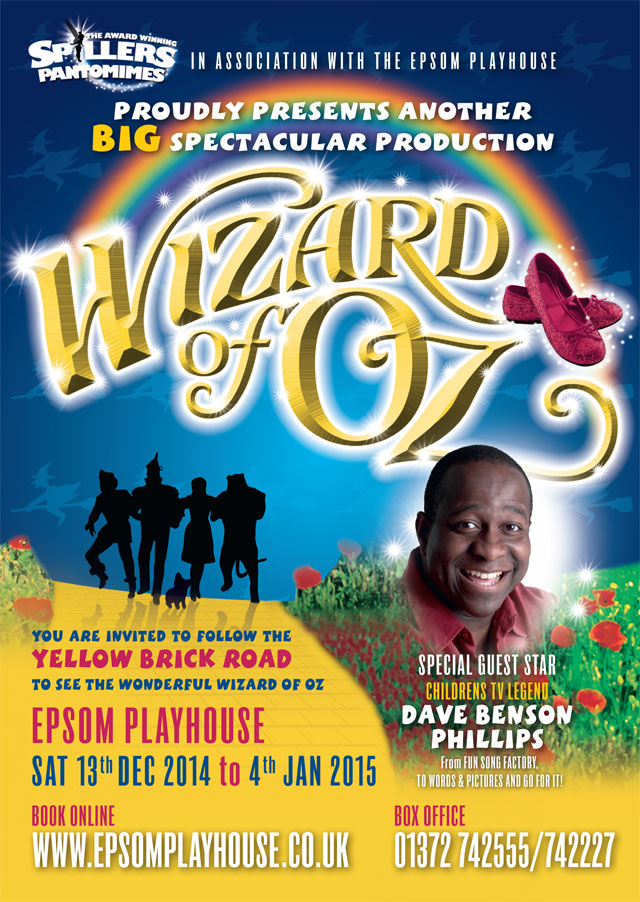 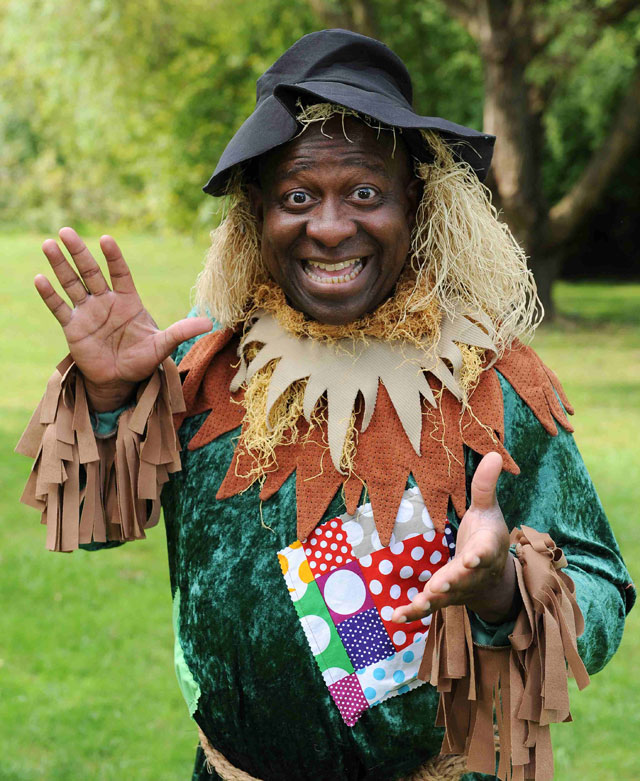 The CBeebies panto, which was filmed at Sheffield’s Crucible Theatre, was broadcast on CBeebies on 20th Dec 2013